If chicken tikka masala is the nation’s favourite dish, then Madhur Jaffrey, the country’s best-known Indian chef, is the one who made that dish’s popularity possible.

We see her as the absolute authority on Indian food and culture. Her mother who sent her letters of recipes would find it all rather funny. 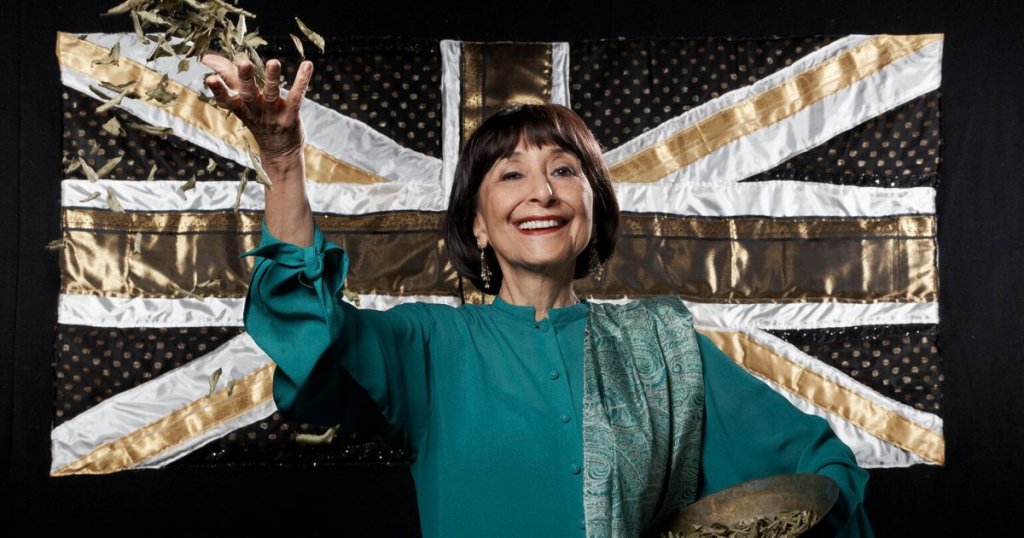 “I think somehow I was destined to be an international tree, and to pass on whatever my roots were feeding to me all kinds of other people.”

Madhur Jaffrey grew up in Delhi, surrounded by cousins, in a sprawling family compound with extensive gardens owned by her grandfather, a successful barrister. Her grandfather woould often preside over dinner at which forty family members would eat otgether.

She had a largely happy childhood marked by lyrical adventures: when she was five she learned how to swim “with the help of a watermelon”.

Though things soon turned darker when in 1947, when she was 14, the partition of India turned Jaffrey’s life upside down: friends of her family were killed, and at school, her Hindu and Muslim classmates refused to talk to each other; with the Muslim girls supporting the partition and the Hindu girls against it.

For her part, Jaffrey just wanted everyone to get along. “I was always in the middle,” she says, “and actually disliked by both sides because they didn’t understand me.”

Her family, who were immersed in and admired British culture and language, were staunchly in favour of Indian Independence as the partition brought an onslaught of violence into their lives.

She is renowned for and is widely considered responsible for bringing Indian cooking to a western audience through her books and her cooking shows on the BBC. Yet Madhur Jaffrey came to the UK on a theatre scholarship. With a dream to be another Marlon Brando, she wanted to act and act in an American style.

She trained as an actress at Rada, then gained a Fulbright Scholarship to study acting in America. Roles on Broadway and the film ‘Shakespeare Wallah’ got her off to a promising start. For her role in ‘Shakespeare Wallah’ she won a huge award at the Berlin International Film Festival for Best Actress. Thinking her career was made, she was soon faced with another sobering reality. The scarcity of work meant she had to turn to something else to support her growing family.

“I was a woman in a man’s country. You were always someone’s daughter or someone’s sister. That was how you were known. I didn’t want to be ‘so-and-so’s sister’.” 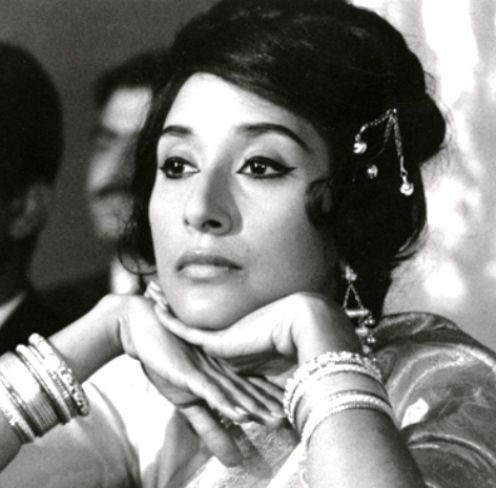 Jaffrey repeatedly faced another kind of racism, the kind that pigeonholed her into roles she describes as “sort of Middle Eastern parts where I was dancing with a camel; the exotic girl. And then it became terrorists and terrorist mothers, and then it became doctors.”

Thankfully (for the rest of the world at large) Madhur Jaffery had also begun writing for magazines and newspapers, primarily as a way to ensure she could send her children to school. One of the things she ventured to write about was food – and somehow, food writing took off.

“I just feel that I didn’t choose any of this, but somehow it’s come about, and I have very few regrets about it.”

In 1966, in order to create further publicity for the film ‘Shakespeare Wallah’, Ismail Merchant persuaded food critic Craig Claiborne to write an article about Madhur Jaffery. “Indian Actress Is a Star in the Kitchen” the headline in the New York Times proclaimed. And thus, Madhur’s life was once again changed.

It led to her first cookbook, ‘An Invitation to Indian Cooking’. Now considered the first Indian cookbook to cut through the noise and challenge Americans to think beyond their (mis)perceptions when it came to Indian food.

As success grew in the USA, the BBC came calling and asked Madhur to be the face of a new cooking show about Indian food.

Writing started as a necessity for her – to support her three young daughters after her divorce from the late actor Saeed Jaffrey. After the books success and the success of her popular cooking show on BBC, it made sense to continue with cooking, despite it meaning letting go of the dream of a full-time career in acting.

Now 87, Madhur has 30 cookbooks under her belt but has no plans of stopping. the New York-based grande dame of Indian cooking, who has opened up the intricate world of Indian food to generations of people in the west, author and an actress who won a Silver Bear at the Berlinale for her first film – Shakespeare Wallah – in 1965, shows no signs of retiring.

An Indian woman brought up in Anglo-Indian society, a citizen of three continents and a trained Method actor who found fame through cooking, Madhur Jaffrey’s multifaceted identity is one she relishes:

“What profession is on my passport? This is the big confusion of my life. When Oxford University was offering me an honorary doctorate, I asked what they were going to give it to me for. How do you combine acting and food as a degree? It was the same when they gave me the CBE. The CBE was for my contributions to the worlds of acting and cookery.” 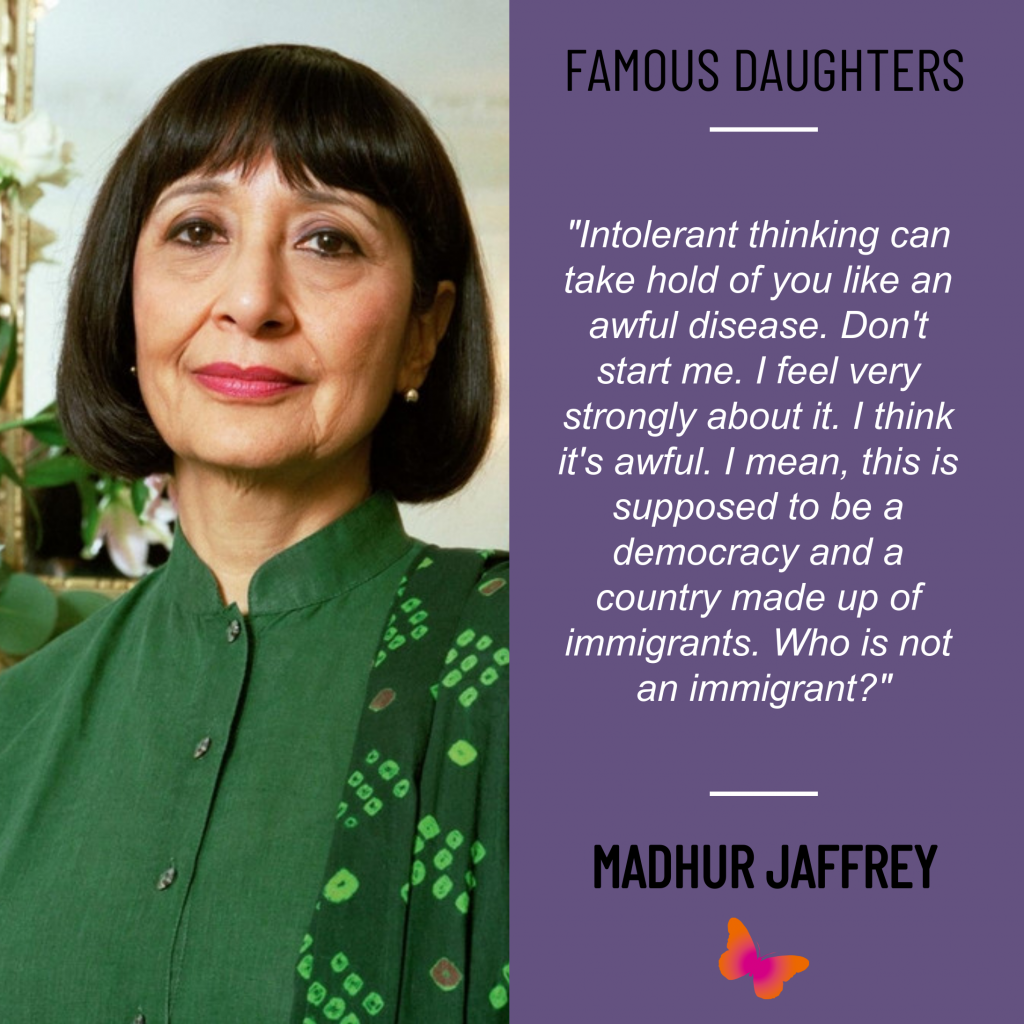