The Nightingale of India, Queen of Melody and Voice of a Nation. Irrefutably one of the most well-known playback singers of Indian cinema heard in homes around the globe. Elder sister to Asha Bhosle. Recipient of Bharat Ratna (Jewel of India) which is the highest civilian award of the Republic of India. Named after a character in one of her fathers plays? This is Lata Mageshkar. 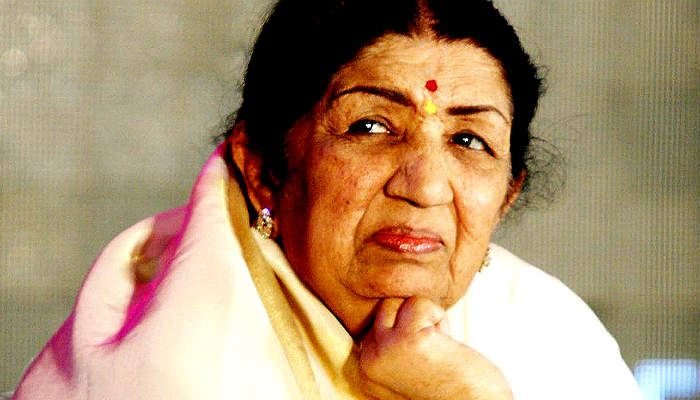 Born in 1929, the oldest of five siblings, Lata was taught to sing aged five by her successful classically trained father, Deenanath Mangeshkar. Initially named ‘Hema’ at birth by her parents, she was later renamed Lata after the female character ‘Latika’ in one of her father’s play ‘BhaawBandhan’.

Her father’s untimely passing meant the responsibility of earning an income to support her family called Lata into an early career in acting. She was only 13 when her father passed away.

“I missed out on my childhood. I had to work hard, but I was immediately given a place in playback.” 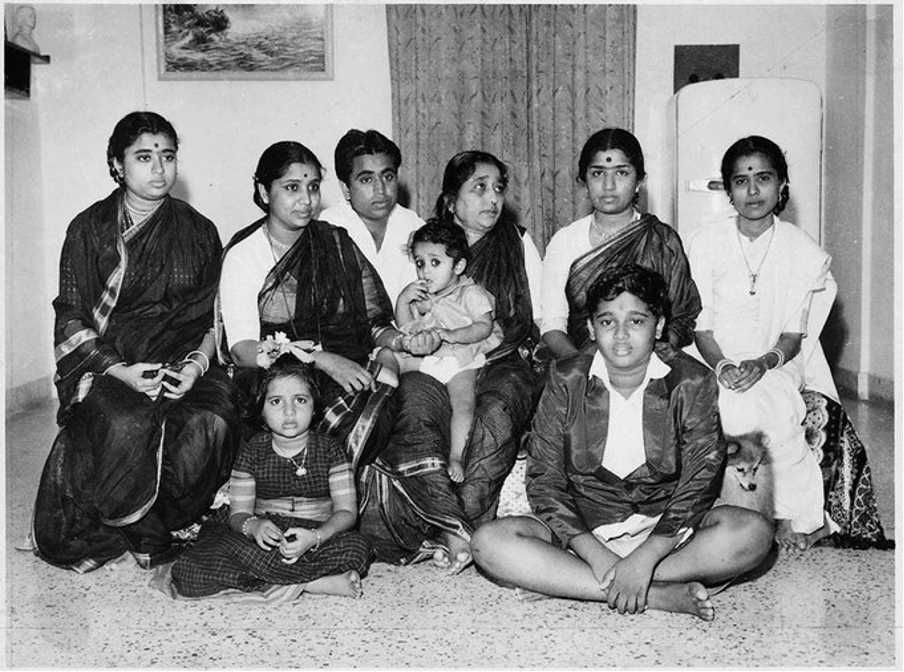 Lata’s career began in 1942 and is still going today. Even with an award filled career spanning almost 80 years, recognition of her talent took time. The film industry had to warm up to Lata. Vinayak Damodar Karnataki, owner of Navyug Chitrapat movie company, helped Lata get started in a career as a singer and actress. 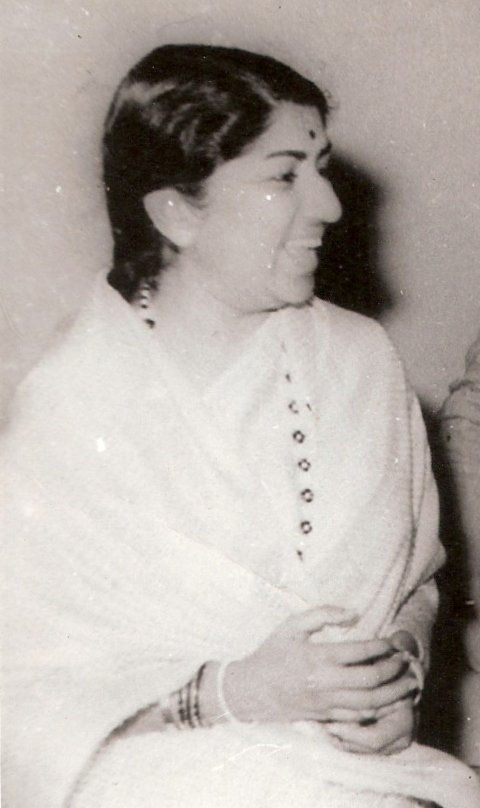 “Since singing was all I knew I set out to recording studios all over Mumbai in my cotton saree and chappals, travelling from one end of the city to the other by train, often on an empty stomach. Kind composers like Naushad saab and Sajjad Hussain Saab would offer me lunch…”

In her early career Lata Mangeshkar was often musically paired with the legendary Muhammed Rafi. Their song ‘Wada Na Tod’ from film Dil Tujhko Diya (1987) featured in the Michel Gondry film Eternal Sunshine of the Spotless Mind (2004), in the scene when Kate Winslet’s character claims she’s going to marry Jim Carrey’s character. The sweet irony of this connection is the song title translates to ‘Don’t break your promise’, it is also included in the film’s soundtrack.

“People said that my duets with Rafi Saab were better than my duets with any other male singer. Though I enjoyed my duets with Mukesh Bhaiyya and Kishoreda, I have to agree Rafi Saab had a fabulous range and a staggering control over the seven notes. Our duets were considered really special by music lovers” 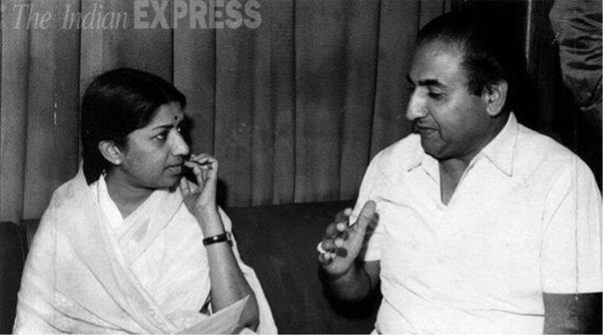 From all the musical Mangeshkar siblings – Lata, Asha, Usha, Meena and Hridaynath – the eldest Lata and the third-born Asha are the most well-known. They both evolved to provide distinctive voices in Indian playback singing. Lata often known for an ageless voice and Asha for a more sultry mood.

And whilst media inevitably hinted at rivalry between her and sister Asha Bhosle, for them both, the sisters have always been close.

“What Asha can do before the mic I can never do. I can never sing ‘Piya tu ab to aaja’ or ‘Chura liya hai tumne jo dil ko’ the way she can…Until some years back we lived in adjoining flats and there was a connecting door between our homes. We were constantly in and out of one another’s homes. At a tender age Asha left home and got married. And she made a big name for herself. I’m very proud of her. We share a very healthy relationship” 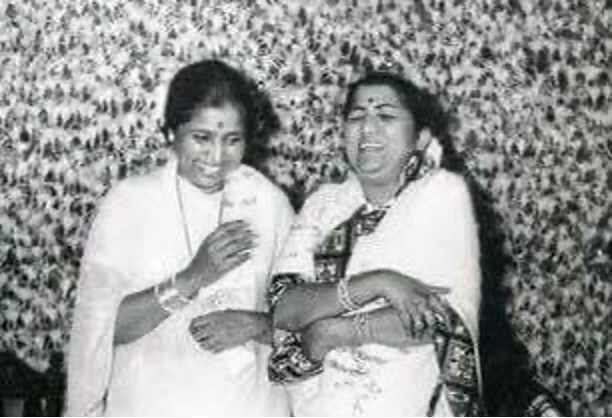 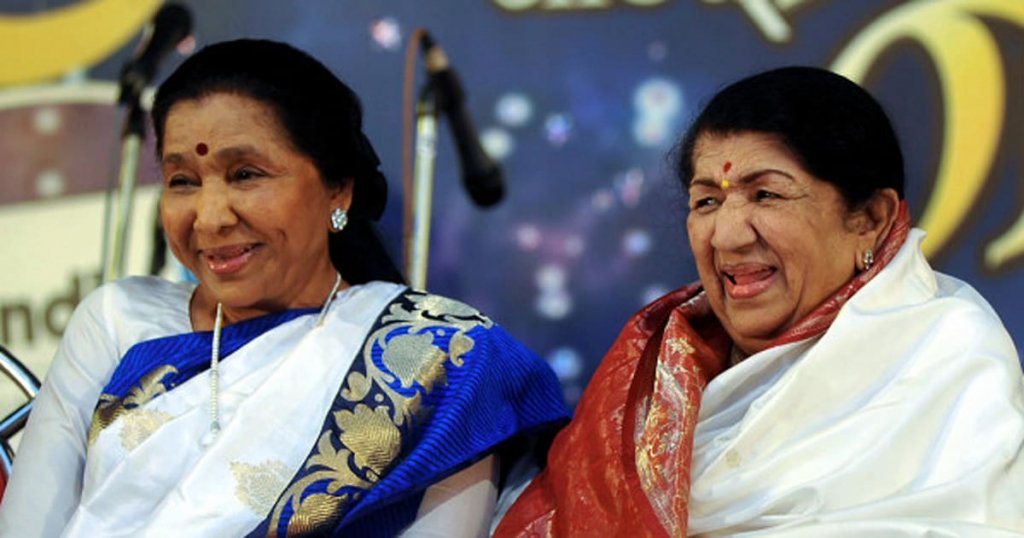 Lata has won multiple industry awards, national awards, and government awards and honours. She has also won four Filmfare Best Female Playback Awards, and in 1969 gave up one of those awards in order to promote fresher, younger talent.

In 1974, Lata became the first Indian to perform at the Royal Albert Hall.

In 2001, in recognition of her contributions to the nation, she was awarded the Bharat Ratna, India’s highest civilian honour and is only the second vocalist, after M. S. Subbulakshmi, to receive this honour.

In 2009, Mangeshkar was awarded the title of Officer of the French Legion of Honour, France’s highest order.

“For me, awards are a token of respect that people are giving me. So no matter how many awards I am receiving, I always feel emotional.” 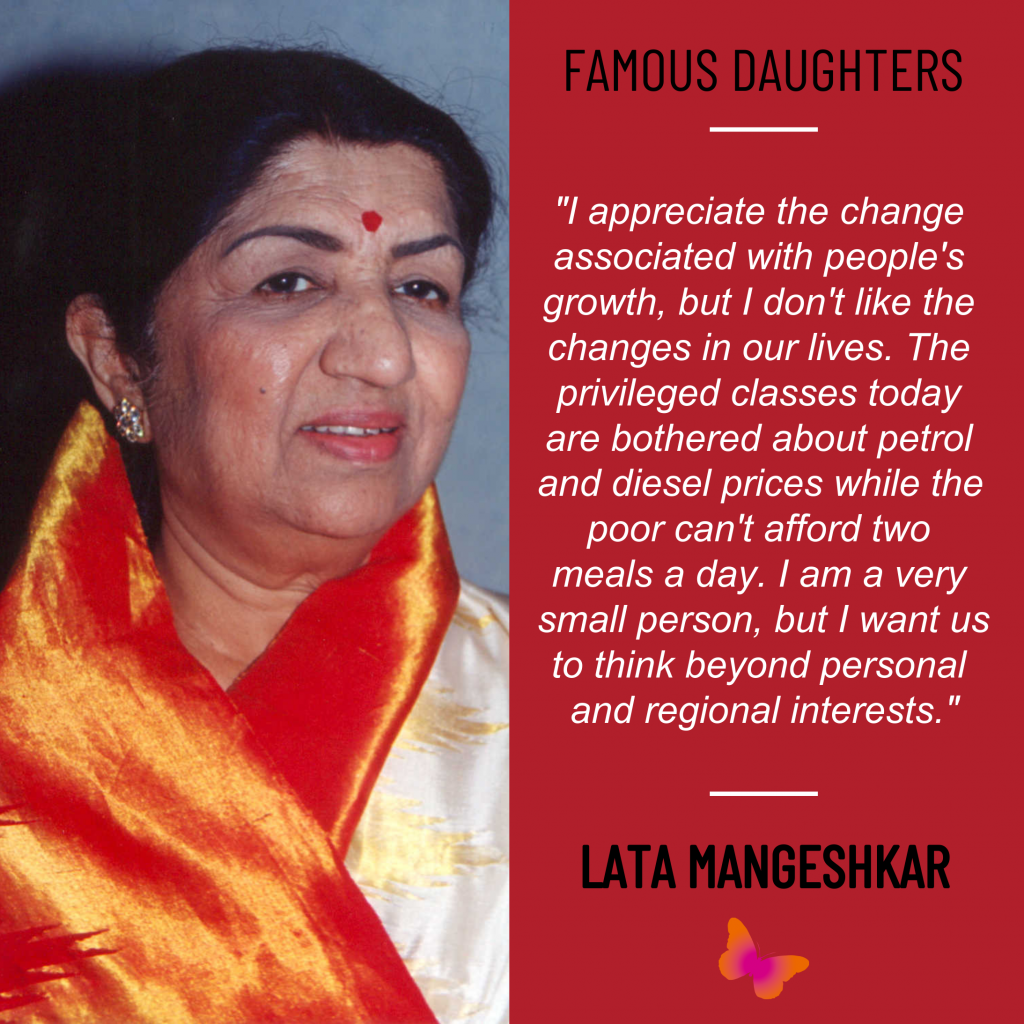