Yayoi Kusama is a Japanese contemporary artist who was a self-described “obsessional artist,” known for her extensive use of polka dots and for her infinity installations.

For the past 41 years, she has lived voluntarily in a psychiatric hospital and has had large-scale solo shows of her work across the globe. Today, her work regularly sells for seven figures on the secondary market, and she has been acknowledged as one of the most important living artists to come out of Japan. 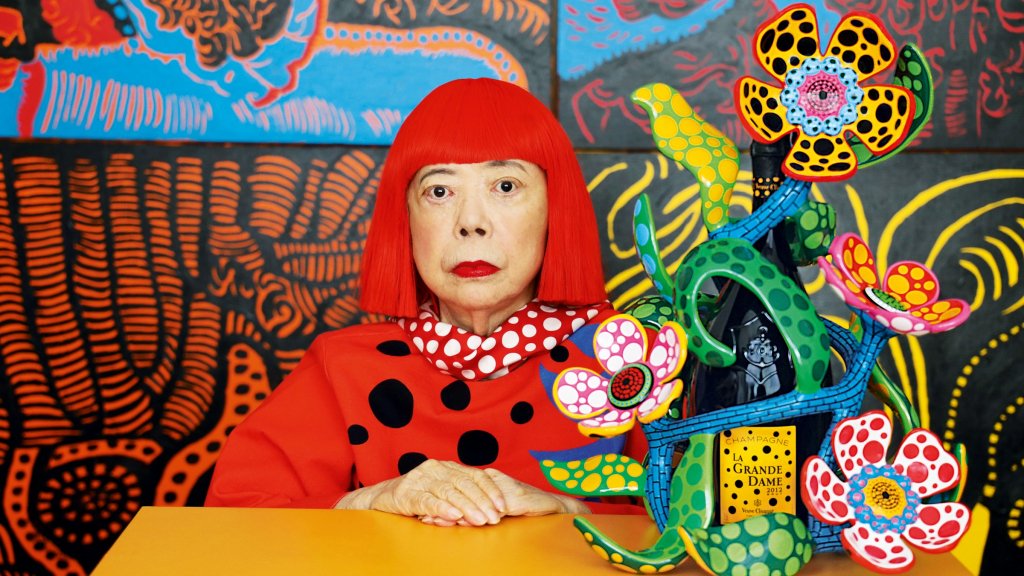 Kusama grew up in a deeply unhappy family. Her father was a philanderer and her mother sent Kusama to spy on him with his mistresses. Her mother tried to stop Kusama from painting – tearing the canvas from her hands and destroying it – insisting that she studied etiquette in order to make a good arranged marriage.

By her own account, Kusama began painting as a child, at about the time she began experiencing hallucinations that often involved fields of dots. Those hallucinations and the theme of dots would continue to inform her art throughout her career.

“Whenever things like this happened I would hurry back home and draw what I had seen in my sketchbook… recording them helped to ease the shock and fear of the episodes.”

Many of the motifs that have become her trademarks were, apparently, rooted in this practice. The first pumpkin Kusama saw was with her grandfather. When she went to pick it, it began speaking to her. She painted the pumpkin and won a prize for it, her first, aged 11. Eighty years on, her largest silver pumpkin sculptures sell for $500,000. 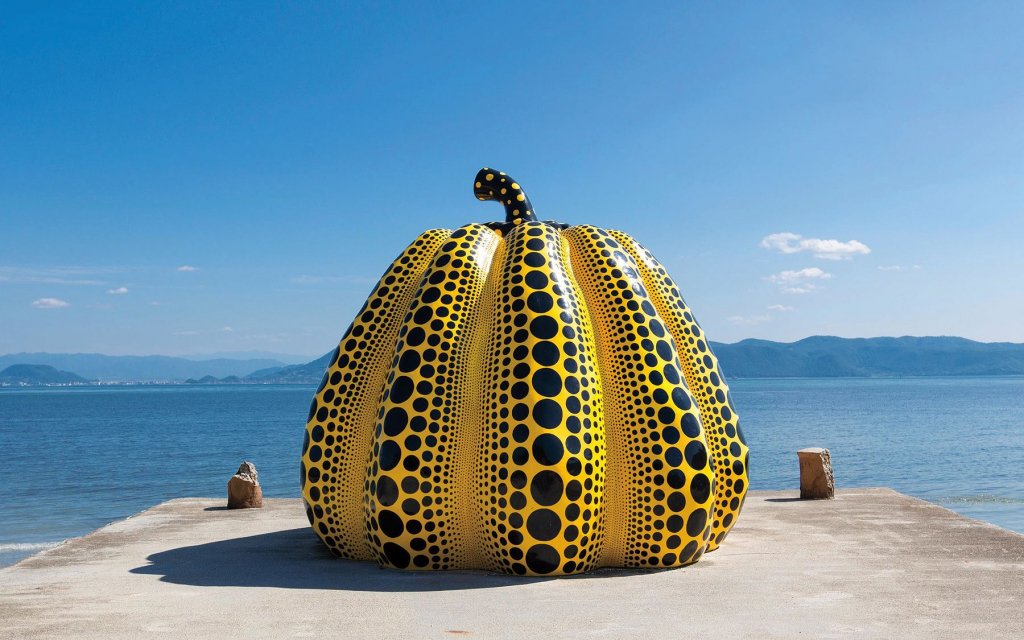 She had little formal training, studying art only briefly (1948–49) at the Kyōto City Specialist School of Arts. Family conflict and the desire to become an artist drove her to move in 1957 to the United States, where she settled in New York City.

Embracing the rise of the hippie counterculture of the late 1960s, she came to public attention when she organized a series of happenings in which naked participants were painted with brightly coloured polka dots. Since the 1970s, Kusama has continued to create art, most notably installations in various museums around the world.

Kusama’s work has transcended two of the most important art movements of the second half of the twentieth century: Pop art and Minimalism. Her highly influential career spans paintings, performances, room-size presentations, outdoor sculptural installations, literary works, films, fashion, design, and interventions within existing architectural structures, which allude at once to microscopic and macroscopic universes.

“I fight pain, anxiety, and fear every day, and the only method I have found that relieved my illness is to keep creating art. I followed the thread of art and somehow discovered a path that would allow me to live.”

The vast fields of polka dots, or “infinity nets”, as she called them, were taken directly from her hallucinations. 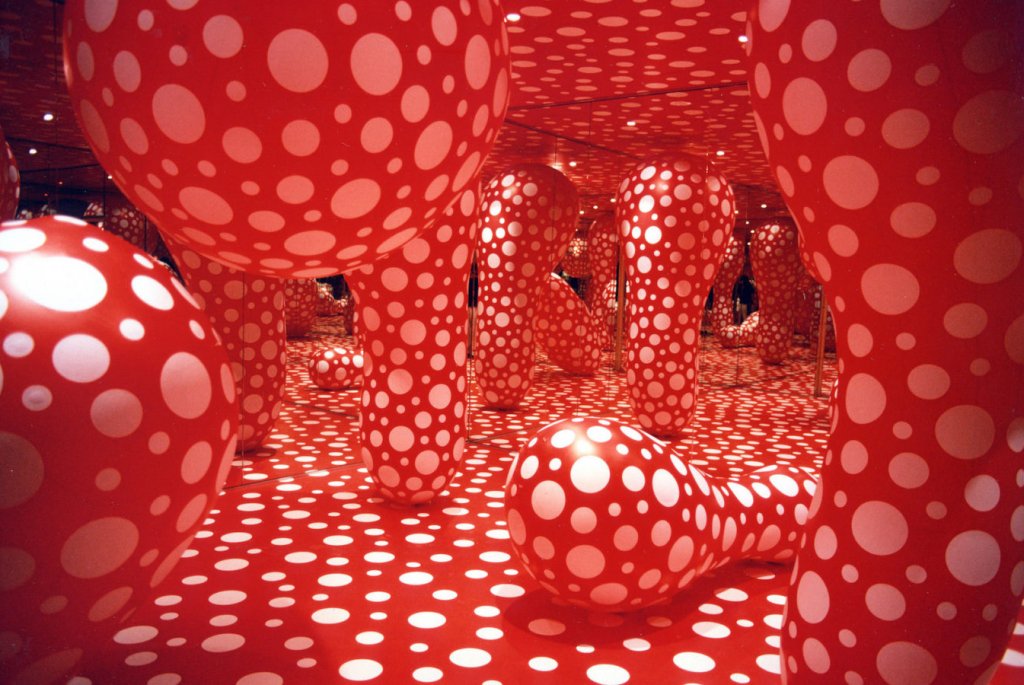 Since 1963, Kusama has continued her series of Mirror/Infinity rooms. In these complex infinity mirror installations, purpose-built rooms lined with mirrored glass contain scores of neon-coloured balls, hanging at various heights above the viewer. Standing inside on a small platform, an observer sees light repeatedly reflected off the mirrored surfaces to create the illusion of a never-ending space. 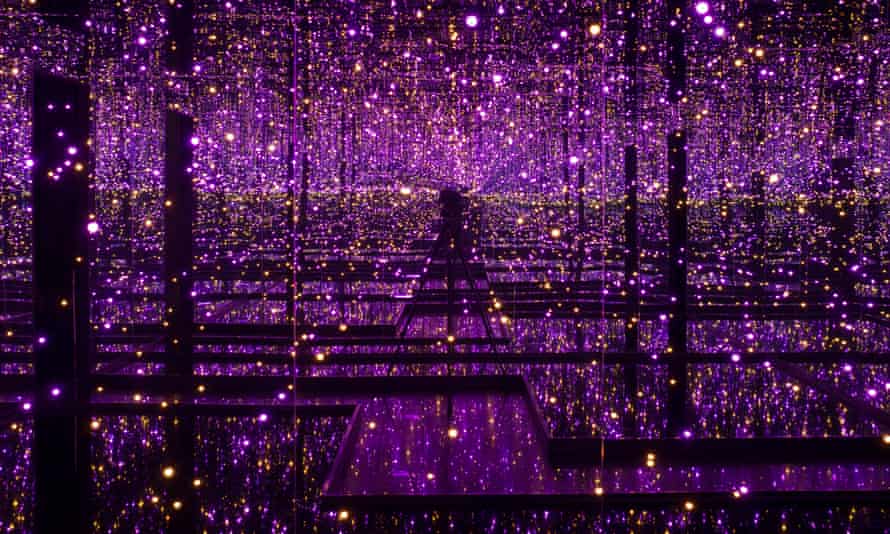 In 1973, Kusama returned in ill health to Japan, where she began writing shockingly visceral and surrealistic novels, short stories, and poetry. In 1977, Kusama checked herself into a hospital for the mentally ill, where she eventually took up permanent residence. She has been living at the hospital since, by choice. Her studio, where she has continued to produce work since the mid-1970s, is a short distance from the hospital in Tokyo.

“I decided that all I could do was express my thoughts through my art and that I would continue to do this until I died, even if no one was ever to see my work. Today, I never forget that my artworks have moved millions of people all around the world.”