Takashi Murakami is a Japanese contemporary artist and entrepreneur widely recognised for his ability to adapt the aesthetics of Japanese traditional art to operate within the context of popular culture.

Drawing from traditional Japanese painting, sci-fi, anime, and the global art market, Takashi Murakami creates paintings, sculptures, and films populated by repeated motifs and mutating characters of his own creation. His wide-ranging work embodies an intersection of pop culture, history, and fine art and blurs the lines of fine art, commercialism, and Japanese visual culture. 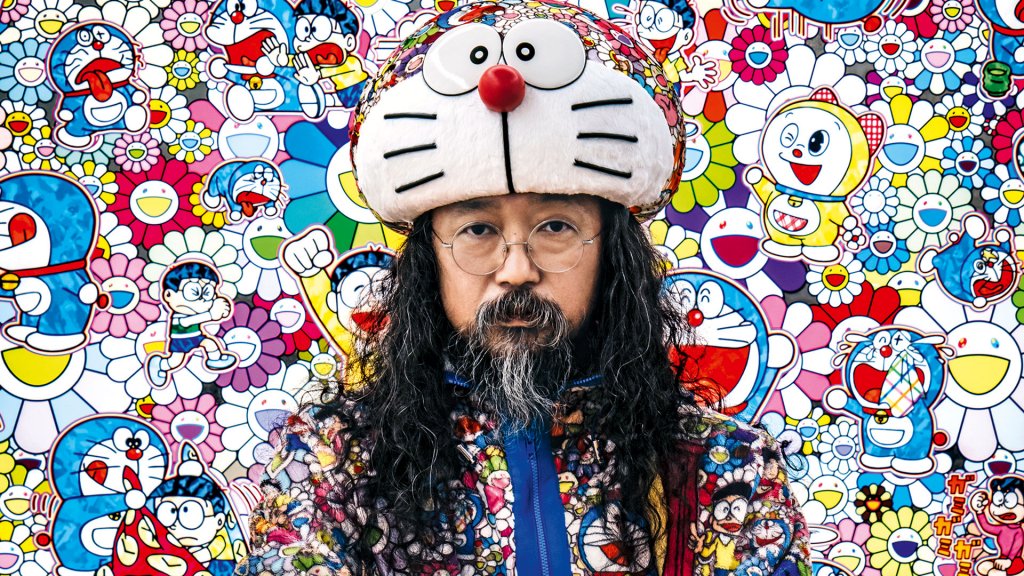 Takashi Murakami’s father was a taxi driver, and his mother was a homemaker. His mother, who studied needlepoint and designed textiles, had a tremendous influence on Takashi Murakami’s interest in the arts. His parents often had him write reviews on exhibitions he had seen. If he refused, he was forced to go to bed without dinner. Raised in such a highly competitive environment, he learned how to think and write quickly.

From early on, he was a fan of anime and manga (Japanese cartoons and comics respectively),and hoped to work in the animation industry.

He attended Tokyo University of the Arts to acquire the drafting skills necessary to become an animator, but eventually majored in Nihonga, the ‘traditional’ style of Japanese painting that incorporates traditional Japanese artistic conventions, techniques and subjects.

He also learned animation production outside of school and continued his knowledge of the contemporary art world through visiting exhibitions and his school’s visiting artist program.

Takashi Murakami’s early works reflect the realities with which he had grown up, exploring the complex post-WWII relationship between Japan and the U.S. These works demonstrate his early development of a playful and seemingly light style that always refer to a more cynical stance.

Takashi Murakami’s work is immediately recognisable for its popping, candylike colours and anime-esque aesthetic. Often featuring playful imagery like smiling flowers, oversized, blinking eyes, and Technicolor mushrooms, Takashi Murakami is truly the heir to Warhol in his ability to appropriate commercial, popular images inspired by anime and manga (Japanese comics) into high-quality pieces of fine art. He is the founder and President of Kaikai Kiki Co., Ltd., through which he manages several younger artists.

Takashi Murakami first gained recognition as a sculptor during the early 1990s, exploring otaku and the contrasts between contemporary Japanese society and American culture. A pioneer of the ‘Superflat’ movement, his style consists of bold colours and anime-inspired motifs across paintings, sculptures, drawings and animations.

Since the early 1990s Takashi Murakami has invented characters that combine aspects of popular cartoons from Japan, Europe, and the US. These figures act as icons and symbols—hosts for more complex themes of violence, technology, and fantasy.

Not only does Takashi Murakami merge different time periods, styles, and subject matter in his work, but his approach to art crosses the boundaries between gallery, studio, art fair, and media as well. Along with creating paintings and sculptures, he has hosted art fairs for emerging artists, curated exhibitions, and made films featuring his many characters and motifs. Combining fantasy, science, and history, he shows that none of these categories can be considered in isolation. 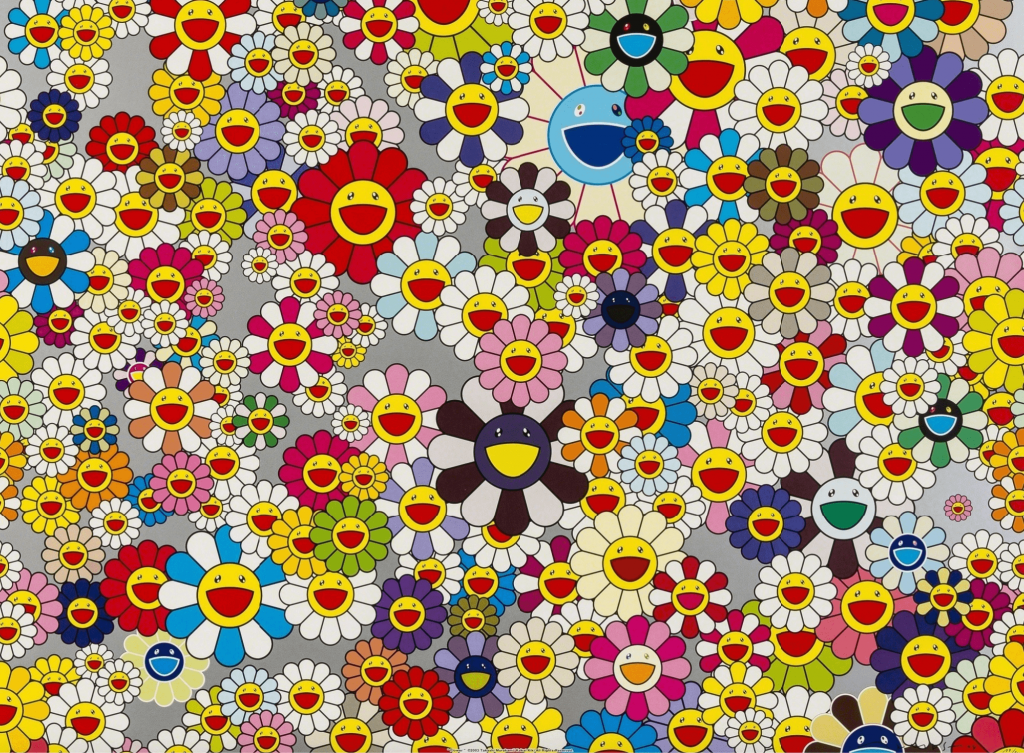 Trained in traditional Japanese art, Takashi Murakami saw similarities between the flat composition of Japanese painting and the simplified aesthetics of anime (Japanese animation) and manga (Japanese comics). His style, which emphasised two-dimensional forms and bold, striking imagery, gave birth to an artistic movement known as Superflat, which not only acknowledged but glorified the interaction between the commercial and art worlds. Superflat has been noted for its use of colour, incorporation of motifs from Japanese traditional and popular culture, flat/glossy surfaces, and content that could be described at once as “cute”, “psychedelic”, or “satirical”.

Takashi Murakami is a great example of how artists can use their work as fine art and commercial art. He truly is a trailblazer that has paved the way for other artists to follow him. 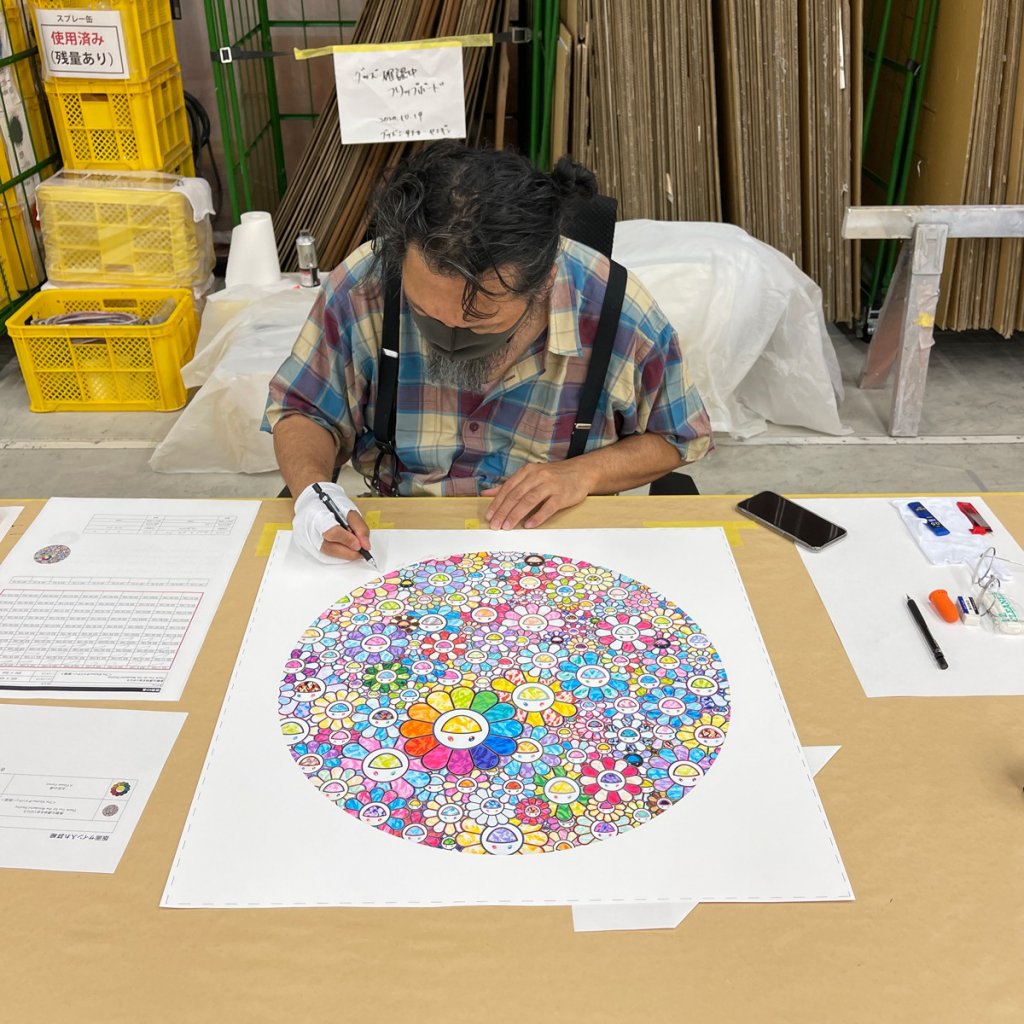 Takashi Murakami signing his print ‘Thank You for the Wonderful Destiny’ in his studio, Saitama, Japan Takashi Murakami has inspired and personally mentored the next generation of Japanese artists. He is also an active mentor to emerging Japanese artists through employing them at his factories, curating exhibitions of their work, and writing essays that contextualise their work within the legacy of modern Japanese art. Despite the clash of reception between his artwork, alternating between heavy disdain and blatant celebration, Superflat has come to dominate the world’s view of Japanese contemporary art.