Sun Mu is a Korean painter. He worked as a propaganda artist in North Korea before fleeing to South Korea in the 1990s. Sun has acquired fame and notoriety for the Socialist Realist style of his paintings, which resemble North Korean propaganda imagery and have even been mistaken for such.

Sun Mu is not the artist’s actual name. The pseudonym adopted by Sun Mu roughly translates as ‘no boundaries’ in English. It’s a bold statement from an artist who in 1998 crossed a figurative and literal boundary that still impacts his life more than 20 years later. 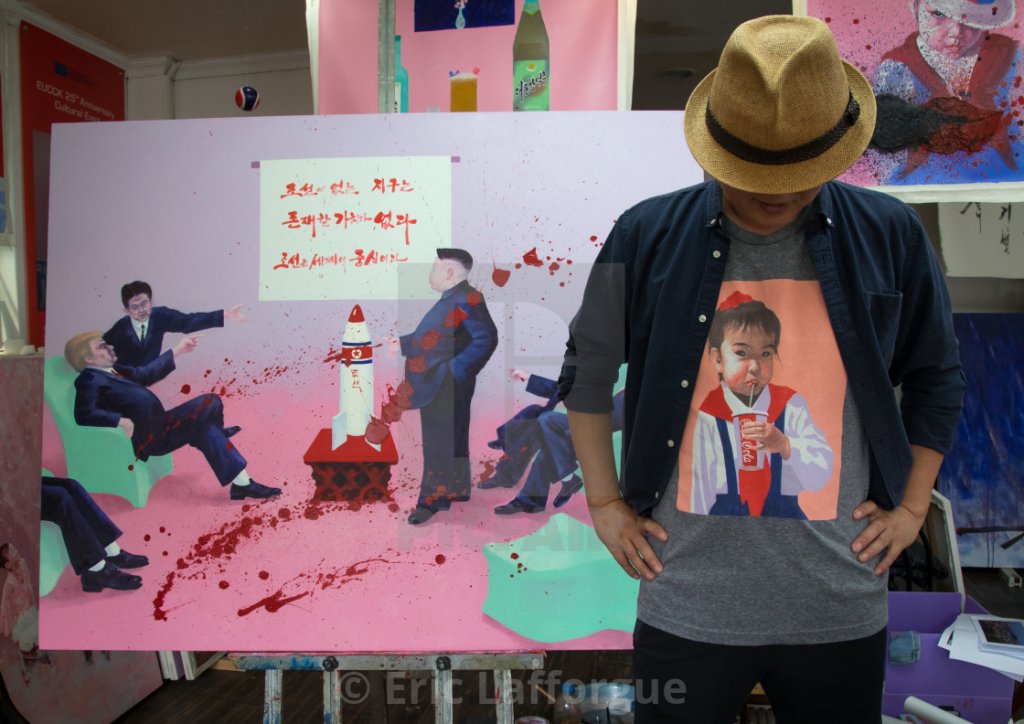 “I believe that freedom is my own personal responsibility. To be an artist is to be someone who can freely communicate to the world; someone who can tell a story about both the past and present, along with the future.”

During the North Korean famine, he left the DPRK under the cover of darkness, swimming across the Tumen River to China and eventually making his way to South Korea.

Sun Mu, who was trained to create posters and murals for the Communist government, is the first defector from the North to have won fame as a painter in the South by applying that same style of propaganda to biting parodies of the North Korean regime. His exhibition in 2007 brought the artist international recognition and he has since been invited to show his work at galleries around the world.

Sun Mu himself and art critics have noted that his images are replete with political satire. He began producing satirical works: blending images of North Korean communism with pop art, sometimes even drawing inspiration from the colourful world of Disney. Sun Mu often depicts images of Kim Jong-Il and Kim Il-Sung, a subject considered sacred which only a few artists are authorised to paint. 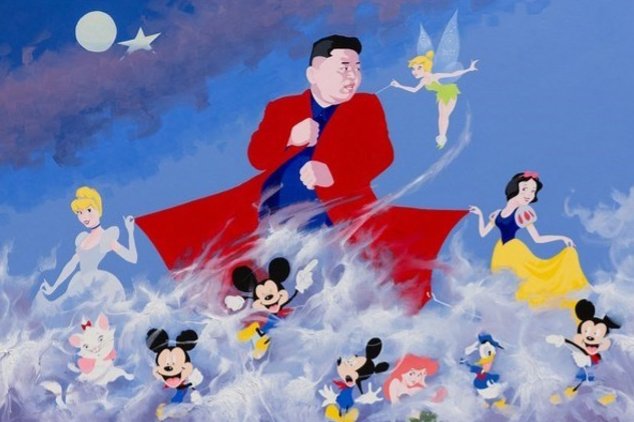 Sun Mu’s ‘Take it off and Play’

“My work, what I call ‘my propaganda’, does contain criticism of the regime. But it also contains a lot of my thoughts, my hopes for the future in images.”

His renown, however, is shaded by political concerns. In addition to adopting a pseudonym, he refuses to allow his face to be photographed, afraid that the family he left behind might face reprisals for his art. His concern for their safety comes as a reaction to the three-generation rule applied in North Korea which punishes the entire family of a defector if their crime is seen as an affront to the state.

“I’ve always been cautious because the danger is very real. I’m living here with my new family but I do have to think of my parents and siblings in the North.” Over the years, Sun Mu – now in his mid 40s – has been taking his art across the globe, from South Korea to China to the United States and Germany. But his satire is largely misunderstood in cities like Seoul, where painting pictures of the ruling dynasty is considered a crime under national security laws.