Katsushika Ōi or Eijo, was a Japanese Ukiyo-e artist of the early 19th century. However, she is better known as the third daughter of the great Ukiyoe master, Katsushika Hokusai (1760-1849). She worked as a production assistant to her father, spending most of her life in close company with him. Some believe Oi may be the real figure behind some of Hokusai’s most celebrated works.

Born in 1800, Ōi was exposed to Ukiyo-e art from a very early age. Many know her father from his painting, The Great Wave off Kanagawa (1831), but have not heard of Katsushika Ōi and the many intricate and delicate paintings she contributed to the world of Japanese art during the Edo period.

Ōi was rather good at drawing from a very young age. She was the most skilled painter of all of Hokusai’s children. She was, along with her sisters Miyo, Tatsu, and Nao, brought up assisting their father at his trade and in his workshop. They became skilled in all the tasks important to being a painter, from preparing materials to composing pictures, working alongside Hokusai’s other students.

Hokusai produced a huge quantity of Ukiyoe prints, illustrated books and paintings throughout his artistic life and Ōi is believed to have assisted his creations from her youth by adding figures in his illustrations or colouring his paintings.

In 1824 Ōi married Tsutsumi Tōmei, a student of her father, but their union ended in a divorce three years later, and the reason was rumoured to be that Katsushika Ōi disapproved of his art style. The artist then returned to her father’s workshop and created her most famous pieces during this time: the 1830s and onwards.

She did not conform to the typical image of feminine virtue that women of her time were expected to live up to within the context of domestic life. Although she was not keen on life as an ordinary woman, she depicted attractive female figures in her works with a remarkably high level of skill.

The total number of works attributed solely to her, as opposed to collaborative works with her father, is a mere ten.  It is as if she was hidden behind her world-famous artist father.  However, she was certainly recognised as an independent artist during her lifetime and has recently been rediscovered by art historians, allowing her to emerge from her father’s shadow.

There is a sketch made by one of Hokusai’s students of a memory of a visit he made to the father and daughter in their rented lodgings in the 1840s. By this time, Eijo would have been in her forties, and she is shown here leaning on her tobacco pipe watching her father at work. Hokusai, now in his eighties, spends his days under the comfort of his kotatsu (a heated table), drawing until he falls asleep, waking only to draw again. It is a picture that shows how Eijo, as a daughter, caretaker and assistant, cared for and collaborated with her father. And she remained with Hokusai throughout the rest of his life. 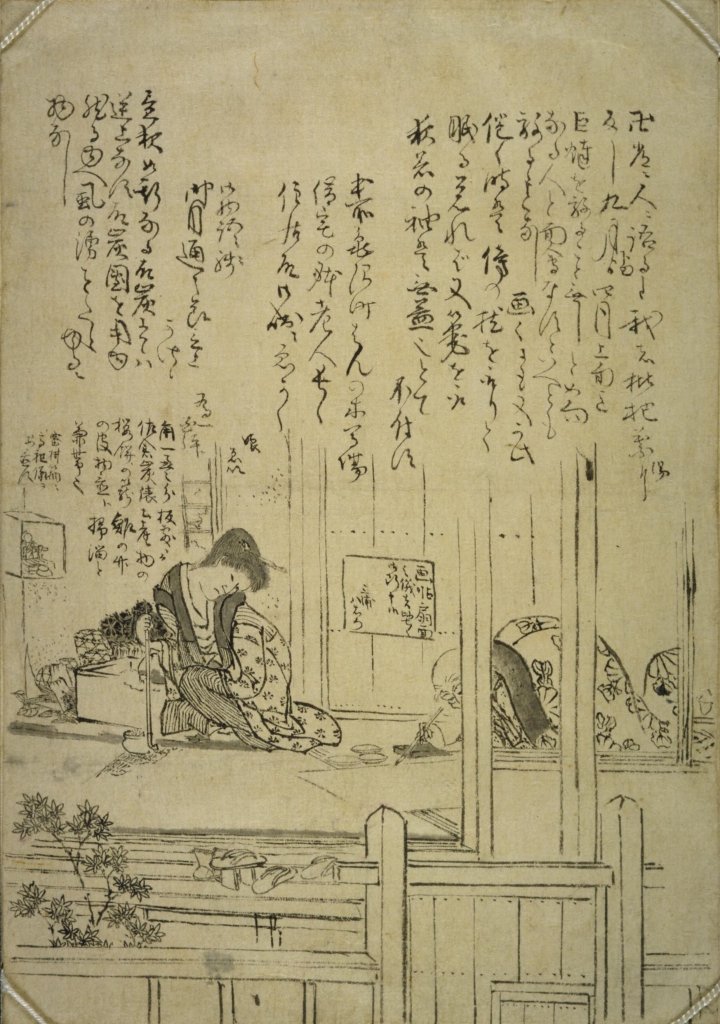 Katsushika Ōi was avantgarde and progressive for her time; illustrating a taboo topic — especially relating to women — was considered unthinkable. Because of her bold choices, we have been blessed with the ability to see and understand Japanese life from this period through a more holistic lens, as no one else would have decided to paint such obscure scenes.

A few years after the war in Japan, Katsushika Ōi was said to have vanished from history, presumably on an artist’s journey where no one could track her down. Nonetheless, she left behind a legacy which changed how people perceived art and women in her homeland. Ōi broke an abundance of barriers as a woman from Edo Japan and lived a successful and self-fulfilling life.

Katsushika Ōi’s ‘Kinuta or Beauty Fulling Cloth in the Moonlight’